Farha is a 14-year-old girl who lives in a small village in Palestine in 1948. Girls her age are traditionally married off or spoken for yet Farha wants to continue her education despite traditions and the restrictions of schooling in her village to boys only. Inseparable from her best friend Farida, who lives in the city but who spends weekends in the village, Farha dreams of joining her at a school in the city. Life in the village is threatened and aggressively changed by the looming danger. Just when Farha’s father is finally convinced and Farha’s dream is at last coming true, the danger comes closer to their village. As violence escalates, Farha is brutally separated from Farida. Terrorized for his daughter’s safety and fearing for her life, Farha’s father locks her up in a concealed, small food storage space by the house, promising to return. But he never does. Over the course of the next few days, Farha undergoes a life-changing experience while buried in the tight dark space, her only connection to the outside world is a small hole in the wall and a few cracks in the wooden door. Farha witnesses a lot of events, outside and inside the room, setting off her journey of transformation and forcing her to grow up and leave her childhood behind.

Arabic, English, and Hebrew with Arabic and English subtitles 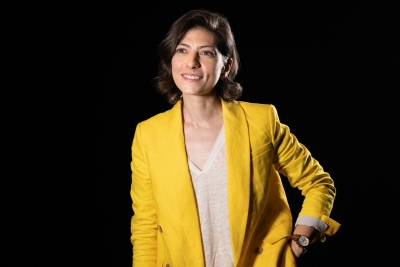 Darin J. Sallam is a Jordanian writer/director of Palestinian roots. She holds an MFA from the Red Sea Institute for Cinematic Arts (RSICA - affiliated with USC). To her credit are 5 award-winning shorts, including The Dark Outside (2012) and The Parrot (2016). A Berlinale Talent 2021 and a Robert Bosch 2015 Film Prize recipient, Sallam was selected to the 2017 La Cité Internationale des Arts residency and to the 2018 Global Media Makers fellowship. She was a jury member at international film festivals and is co-founder & managing partner at the Amman-based production company TaleBox. Her debut feature film FARHA (2021) had its world premiere at the 46th Toronto International Film Festival and continues to be selected to renowned film festivals worldwide where it received the Jury Award at the 12th Malmö Arab Film Festival 2022, was awarded Best Euro-Mediterranean Film, Best Director and Best Actress by the 6th Aswan International Women Film Festival 2022 in addition to receiving a special mention award by the 1st Red Sea International Film Festival 2021’s Feature Competition Jury.