Filmmaker Karim Aïnouz decides to take a boat, cross the Mediterranean, and embark on his first journey to Algeria. Accompanied by the memory of his mother, Iracema, and his camera, Aïnouz gives a detailed account of the journey to his father’s homeland, interweaving present, past, and future. 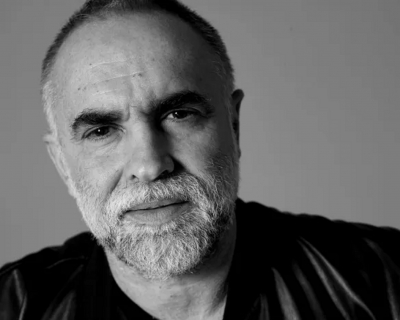 Karim Aïnouz is an award-winning film director and screenwriter. He was born in 1966 in Brazil to a Brazilian mother and an Algerian father. Aïnouz debuted as feature director with Madame Satã (Cannes, Un Certain Regard, 2002). Other works include Nardjes A. (Berlin Panorama, 2020), Central Airport THF (Berlin Amnesty Prize, 2018), Futuro Beach (Berlin Competition, 2014), The Silver Cliff (Cannes Directors’ Fortnight, 2011), and Love for Sale (Venice Horizons, 2006). In 2008, Aïnouz co-directed the TV series Alice for HBO Latin America. His latest feature, The Invisible Life premiered in Cannes’ Un Certain Regard in May 2019, where it received the Main Award and more than 50 prizes worldwide. Aïnouz is also a member of the Academy of Motion Pictures Arts and Sciences.