Synopsis
Expropriated Palestinian houses are ironically repackaged on the Israeli real estate market as “Arab-style”. Their factual history is concealed behind this architectural euphemism. Taking the form of a property consultancy, this interactive web documentary art revisits the individual history of these homes, uncovering Palestinian stories of displacement, dispossession and cultural cleansing from West Jerusalem. 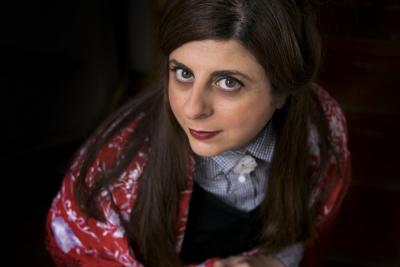 Biography
Raised in the Palestinian global diaspora, artist, filmmaker and essayist, Alexandra Sophia Handal was born into a Bethlehemite family in Port-au-Prince, Haiti in 1975 and spent her adolescence in Santo Domingo, Dominican Republic. She studied art and theory in New York City and Boston, USA before obtaining a practice-led PhD in Fine Art from the University of the Arts London, UK. In the past decade, Handal has created a multi-faceted body of work that expands the documentary genre by making use of the polarity between art and scholarly research, maintaining a sensual, intuitive and poetic stance. These works in film, new media, printmaking and painting were shown together in her first solo museum exhibition Memory Flows Like the Tide at Dusk, at the Museum of Contemporary Art Roskilde, Denmark (2016). Based between Europe and Palestine since 2004, Handal recently established her atelier in Berlin, Germany.